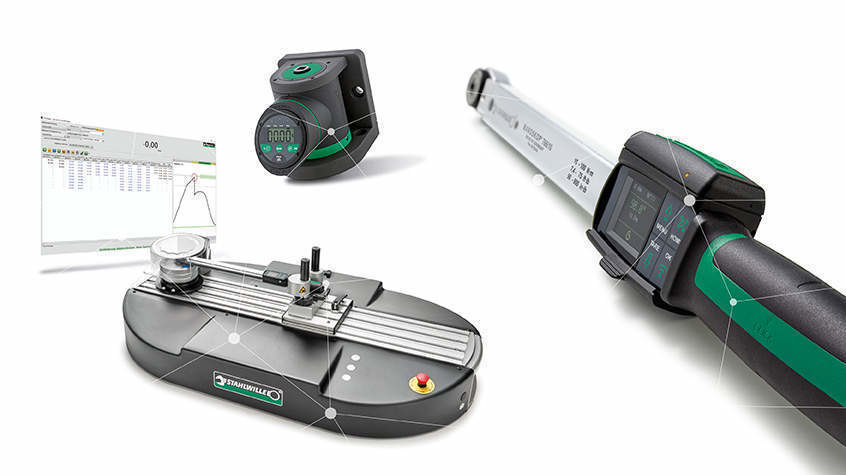 STAHLWILLE, one of the world's leading suppliers of torque technology, measuring and calibrating units, is presenting its latest quality assurance solutions at this year's Control in Stuttgart. Some of the items on show are network and integration-capable torque and calibrating tools, the latest electromechanical TORSIOTRONIC® torque screwdriver and the TORKMASTER 5.0 software.

Controlled tightening is playing an increasingly important role in QA – which means it is among the highest ranking topics at this year's Control international trade fair for quality assurance. For the first time at this trade fair, STAHLWILLE is demonstrating interconnected and integration-capable solutions that the company has developed under its new DAPTIQ label.

At the stand, the MANOSKOP® 766 DAPTIQ torque wrench, the SmartCheck DAPTIQ torque tester and the automatic perfectControl DAPTIQ calibrating unit will be on show. Using the integrated wireless module, MANOSKOP® 766 DAPTIQ can communicate with the production planning and control system and, in this way, receive instructions and settings. At the exhibition, STAHLWILLE is demonstrating how this is possible in an augmented reality scenario using smart glasses: the user is guided visually from one fastener to the next following a predefined tightening sequence. The control system makes all the settings on the torque wrench automatically and logs the fastener details after each successful tightening operation.

The SmartCheck DAPTIQ torque tester contains an RFID reader that enables it to recognise tagged tools when they come in range. In addition, it has an interface that links it to the Computer Aided Quality system (CAQ) which coordinates all the test data in realtime. This allows automated workflows to be created in which every torque wrench is checked before the CAQ system releases it for production tasks.

The perfectControl DAPTIQ is also equipped with an RFID reader that enables it to detect tools automatically as they approach. With the aid of the TORKMASTER software supplied, it can also be integrated in the CAQ system. This enables the CAQ system to make settings and access all the measuring and calibrating data.

At the trade fair, STAHLWILLE is presenting the latest version of its software: TORKMASTER 5.0. This version makes it possible to test and calibrate automatically in accordance with DIN EN ISO 6789:2017, Parts 1 and 2. That standard has been mandatory since 1.4.2018 and has made calibration far more complicated. TORKMASTER 5.0 and the perfectControl unit now enable calibration laboratories to comply with the standard extremely efficiently.

One particular highlight at the show is the TORSIOTRONIC®: this is the world's first electromechanical torque screwdriver that combines the advantages of digital technology with those of a mechanical trigger. The target torque is digitally set – either using the buttons on the tool or by defining the fasteners on the PC and transferring the settings to the tool via a micro USB port. When the set torque has been reached, the torque screwdriver gives the user an unmistakeable tactile stop signal. STAHLWILLE has only recently won the coveted Red Dot Award in the tools category for this innovation.