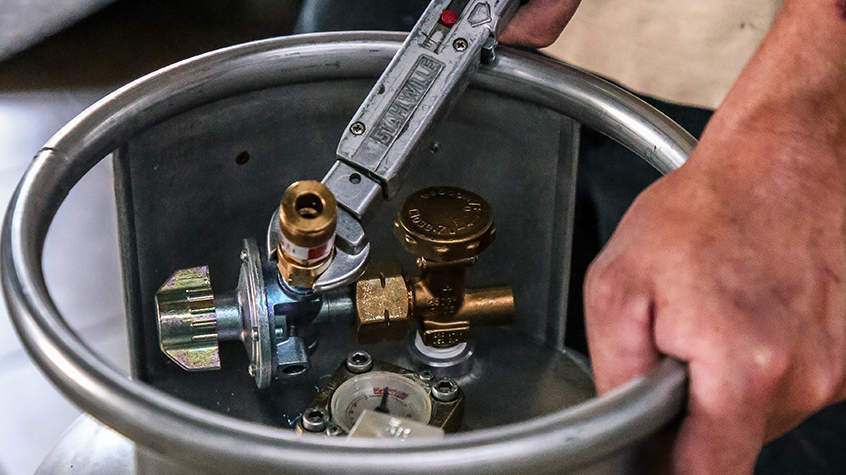 Torque or moment (symbol in physics »M«) describes the turning effect of a force (F) on a member – a fastener, for example. It is calculated by multiplying the force applied – in »newtons« or »N« – by the length of the lever used to apply it to the fulcrum – in »metres« or »m«. The unit used for the resulting moment or torque is N x m, or N·m.

In terms of the physical principles involved, a bolted joint is technically a far more complex matter than applying a screwdriver, ratchet or torque wrench would have us think.

So what has that got to do with torque? Quite simply, for many bolted joints, a predefined tightening torque is specified, and the required preload is only attained if the correct torque is properly applied. To achieve this, tightening tools such as torque wrenches that are calibrated to the national standard are indispensable. »Calibrated to the national standard« means the tools are subjected to a regular calibration process. A common practice is annual calibration of the torque wrench by a recognised, or accredited, calibration laboratory because that enables controlled tightening in reproducible quality.

The longer the lever, the less the worker will notice what a tremendous force he or she is applying to the head of the fastener. This becomes even more complicated if insert and shell tools with an extension that deviates from the standard are used together with the torque wrench. In this case with respect to mechanical torque wrenches, it is necessary to recalculate the setting or display value for the torque wrench in use before applying force and, in the case of electronic torque wrenches, the tightening parameters will have to be adjusted.

The most common unit of measure used to describe torque is the newton metre. This unit is part of the international system of units (SI) for physical quantities. One newton metre corresponds to one joule of energy and is the mechanical work performed when one newton is applied over a distance of one metre.

The foot-pound is the Anglo-American unit of measure used in the United States (and occasionally in the UK) for torque, or moment. Originally, it was called the pound-foot (lbf·ft), but was renamed to avoid confusion with the unit of energy of the same name. One ft·lb corresponds to approx. 1.356 joules – which is the energy required to raise one pound avoirdupois one foot.

The inch-pound (in·lb) is also an Anglo-American unit of measure. One in·lb corresponds to 0.11298483 joules, which is the energy required to raise one pound one inch (2.54 cm).

It is hard to believe, but, in a simplified way, a screw can be compared with a spring. It can be elongated to a certain extent and then returns to its original length, creating prestress. A point worth noting is that this process is subject to many parameters – like the amount of underhead friction, changes in the amount of force applied and the friction in the thread, and the settling effect inherent in the entire bolted connection. A torque wrench in the hands of properly trained staff can help to minimise negative effects and achieve very exact results.

Force to be reckoned with: tightening torque

Tightening torque acts on the bolting point – in the centre of the fastener axis. From a physics point of view, it is the product of the length of the lever and the force applied to tighten the fastener.

If one considers that on average only 10% of the total moment applied acts as a pretensioning force through the inclined plane (i.e. the thread) and the remaining part is essentially lost in overcoming head and thread friction, it quickly becomes clear that manual tightening without a torque wrench is not a logical procedure for controlled tightening. It is also important to note that no two fastener tightening situations are the same – fasteners behave differently depending on the specific joint in question. Due to the different degrees of yield in the bolted connection, the joint can vary from very hard to very soft. This refers to the angle of tightening from the moment the head contacts the mating surface. This angle can range from very hard (approx. 30°) to very soft (approx. 720°). The influencing factors here are the materials to be joined (e.g. copper/steel, seals, the number of fasteners used, as well as the clamping length itself, etc.) together with the quality properties of the fastener itself. 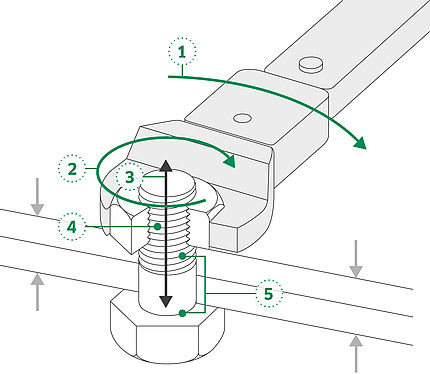